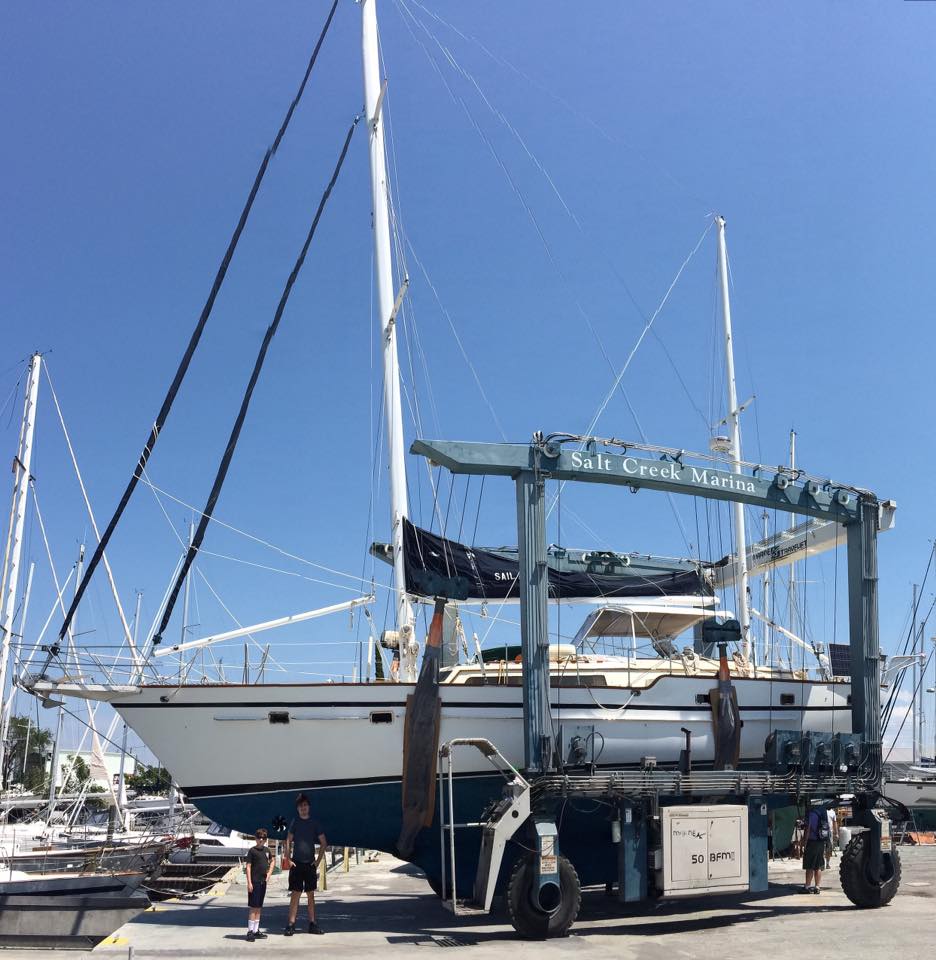 After the “second showing” of the 52-foot Irwin, we gave Gene a $10,000 downpayment (escrow), and Brian arranged for John Banister to come to our coast for the survey and sea trial. We had to wait two weeks because Amanda’s husband, Josh, wanted to be in town for the big day.

When the day finally arrived, John met us at the marina early. We ran into Amanda near the marina office and she took us all to the boat. We’d left Max and Mason at the apartment, offering to pick them up later for the sea trial. Brian and John immediately got to work. John’s surveys take all day long. He is detailed, meticulous, and excellent. Remember, he’d recently saved us tens of thousands of dollars by alerting us to a huge lemon.

After an hour or so, the suspense was killing me so I pulled John aside and said, “Well?”

He said, “This is a good boat. It’s been well-maintained and the captain took good care of it. I’m trying to figure out why the price is so low. And, I WILL figure it out!” He got back to work.

I’d brought my laptop with me to get some work done but chatting with Amanda, and watching the guys with their butts in the air and their heads below the floor was far more fun than working. Another hour passed and Richard took sandwich orders, offering to go pick them up from Jimmy Johns. The captain, Josh, was jovial and kind. You could tell he was very protective of his boat. He had to let the guys do their work but he also didn’t want anything going wrong. Of course, he definitely wanted to sell it. After some nosy questions from me (which is normal for a writer!), Amanda told me more about their lives.

Over the years, they’d owned smaller boats, and even lived aboard with their three small children at the time. When they weren’t cruising, they were RVing around the country. And, they homeschooled their children, just like us! Amanda and I couldn’t believe how much we had in common. She and I were getting along GREAT!

After their kids were grown, they cruised together alone, and sometimes with friends. Since Josh’s job required him to fly back and forth to wherever his ship was stationed at the time, he’d leave Amanda alone at foreign ports, where she’d make herself at home on the boat, venture onto the mainland for supplies and fun, and wait for him to return. She said she was never nervous, not even on the night when she saw a line of drug boats leaving port. She said you always know the drug boats in small countries because those guys are the only ones who can afford cigarette boats. She spun a pretty good yarn and she had my vegabond spirit screaming, “I wanna do all of that, too!”

I asked her why they were selling the boat. She said Josh’s mother had recently passed and that they were taking care of his elderly father at their home in the northeast, who wasn’t doing well. They planned to buy another RV, and travel on land for awhile. And, they knew they’d eventually buy another boat but they were ready to give this one up. And, I was so happy they were!

The sea trial was EXCITING! First, Josh drove the boat around the corner to a local boatyard (Salt Creek), for the haul-out. Our amazing surveyor, Capt. John Banister, getting down and dirty to find all the flaws!

That lasted for a couple of hours. It was unseasonably hot that day, but very windy. A local broker’s office was right next to the boat lift. They had a shaded patio, and offered to let us sit there. They even gave us all the bottled water we could drink, and allowed us unlimited use of their bathroom (which had a door that didn’t quite close all the way – ha ha). They were so nice! And, when one of them asked me what we were going to change the name of the boat to, I told him, “No Tan Lines.” That’s when he started getting REALLY friendly with me, openly flirting, and finally asking if he could see my “no tan lines.” Oh, those brokers! They are rascally devils! I just laughed and waved him away…after thanking him for the water, of course.

After the haul-out was complete, the boat was splashed, we all climbed back on board, and we headed out into the bay, where the wind was blowing a steady 20 knots, and the seas were running 4 to 6 feet. It was going to be an exciting sea trial!

NEXT: MASON GETS SNAPPED BY A LINE, BUT DOESN’T CRY