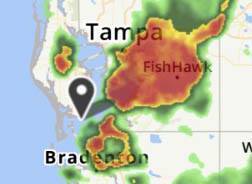 So, I was sitting here working on the boat yesterday. Just answering emails. Pretty mundane. After a morning of errands, grocery shopping, and Mason having a friend over for some gaming, I was immensely enjoying the peace and quiet until…BAM!

The boat went from not moving at all to lurching harshly to port (the left). It bounced back, and then lurched again. My eyeballs darted to the port (window) and huge, dark clouds were on the horizon.

We all jumped up, and spilled over each other to get outside. Our Managing Editor, Brian, quickly went to work checking all the lines. The wind was deafening as it screamed through the rigging on our boat, as well as everyone else’s. ALL our neighbors were outside their boats as well, scanning the horizon. We were all looking for the same thing. A funnel cloud. Thankfully, there wasn’t one.

Brian yelled over the clanging, “Remove the port cockpit line! Toss it to me!” Mason (age 13) took the line from me, and gave it to Brian, who expertly lassoed it around the piling on the starboard side, and then quickly wound the line around the starboard cockpit winch.

To hear the wind whistling through the rigging, go to the 0:15 mark on THIS VIDEO.

No Tan Lines (“Tanny”) was pitching like crazy! There were whitecaps inside the marina by that point. I carefully walked to the bow, and grabbed two bumpers that weren’t tied down. I tossed them to Mason in the cockpit. Max (age 17) was outside saying, “Man, it’s gonna be a bad one! What do you want me to do?” I had him toss some loose items down the companionway stairs. We’d deal with those later.

Then, we waited for the rain to begin. It’s fun to stand on the stern of the boat, listening to the sounds of rigging under attack, feel the wind render your hairspray completely useless, and wait for the first big blops (big drops = BLOPS!) to slam you in the face before you all race down below below, and close the companionway door.

We all did that, which was fun, and we then got settled for a BIG, exciting ride! For about half an hour, Tanny was beaten up pretty good. It felt like it had when we had the mast out.

And, a little while later, Max yelled, “We’re hitting something!”

Brian tossed his laptop to the side, and was up and off the boat lickety split. The wind had shifted again and the anchor was hitting the dock box. He adjusted one line, and then jumped back on the boat. I’d run up to the bow to help…but he didn’t need my help. We both dove back into the boat, and dried off as best we could. There was no point in me changing clothes. I knew I might have to do that all over again.

And, I did. Max hollered again. “Something sounds really weird!”

I told Brian to keep working. I’d handle this one. I went to the v-berth. Yes, it was definitely a weird zip, clang, zip clang noise. Hmmm. I opened the door again, got hit in the face by wind and rain, crawled out of the cockpit, and made my way to the bow. The halyard had come loose, and was sliding up and down (and slapping) some metal rigging. I tightened the halyard line on the mast (praying we wouldn’t get struck by lighting at that exact moment), raced back to the cockpit, and trailed a river of water into the salon once again.

My hair was matted to my head. My mascara was running. My dressed was soaked. And, I was having the time of my life! 🙂

A few minutes later, one of the ACs stopped running (no clue why) and we lost our Internet (that’s still out, too, but I have wifi hotspot on my phone so I’m still online).

It rained for another two hours and the wind diminished considerably during that time. Our neighbor posted the highest wind speed during the storm. It was 45 knots. Whoo hoo!

NEXT: The BEST Storm Photo I’ve Ever Taken!