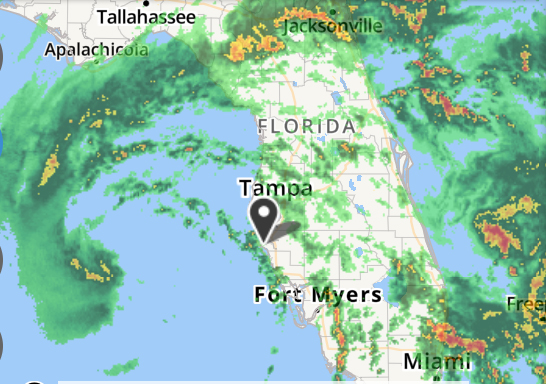 We’ve been watching (Sub)Tropical Storm Alberto for a couple of days now with a wary eye. After Hurricane Irma last year, we knew this one would be a minor blow.

We could either ride her out on No Tan Lines, or head to the satellite office downtown. But, sitting in a stationary building during all the excitement sounded really boring so we opted to remain on board. And, it’s a good thing we did. The shifting winds and high tides required adding new lines, and making frequent adjustments.

Yesterday, the sailboat next to ours started taking on water in the heavy rains. It’s not plugged in to power and I imagine the batteries died long ago. We’ve been here for a year now and we’ve never met the owner, nor seen anyone other than marina staff on board. They put a pump in the boat to save it.

Alberto’s eye is passing directly west of us as I’m typing this. We’re getting our strongest winds yet and “No Tan Lines” is bouncing all over the place. We’re having a great adventure! Just adjusted the bow line because were were hugging the dock. Mason (age 11) ran in to tell us. The dock is directly outside his bedroom port so he was the first one to notice. He’s always on “crashing against the dock duty.” Found some damage on the toe rail on the starboard side (by the dock). Not sure when that happened but it was during low tide. We’re in a very high tide right now (storm surge) and we have swells IN the marina. It’s a FUN day!!!! Coco the dog is loving it! Rambo the cat….not so much.

Luckily, we haven’t lost power or Internet. I’m glad he’s only giving us a glancing blow. It’s good practice for the next one!

NEXT: Minor Surgery Aboard “No Tan Lines” During Tropical Storm Alberto!

One Reply to “Riding out Tropical Storm Alberto! Whoo hoo!!”