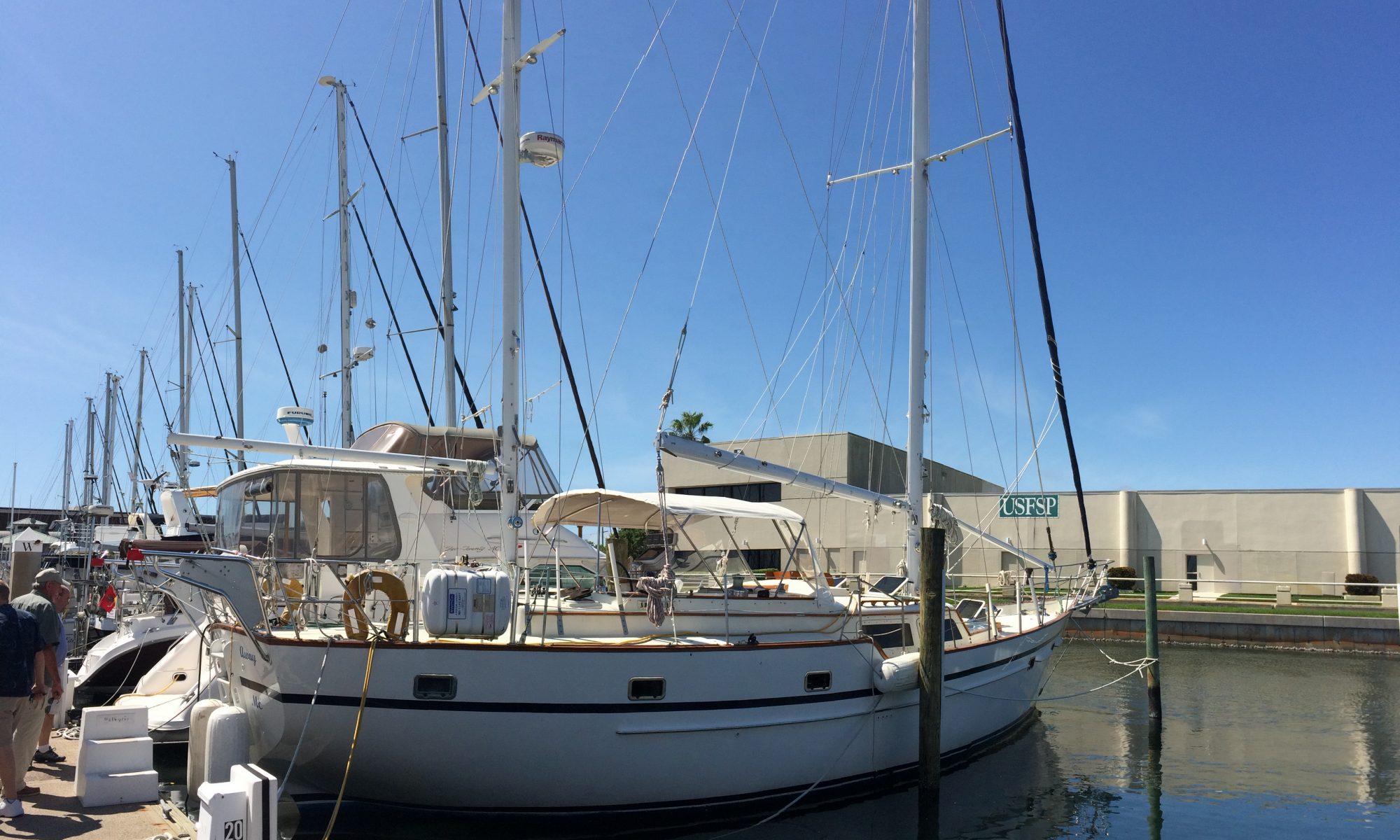 We still had three months until our apartment lease ran out but, after learning of Stan and Chris’ four-year odyssey to get their own 52-foot Irwin, we were a bit discouraged. After touring their boat that night, we drove back to the apartment. I had work to do so Richard got on his laptop, and started searching for Irwins. We figured we might have to search out of state but we were willing to do that if it meant finding just the right floating home for our family.

It had only been about 45 minutes since we’d left Stan and Chris’ boat when Richard turned to me, and enthusiastically said, “Found one!” He immediately emailed the link to me and Brian. You’re not going to believe this but that boat was less than two miles from our apartment…and it was in our price range! I excitedly looked at pictures of the beautiful interior while Brian poured over the specs. Richard was still looking for others online so we’d have some comparisons.

The boat was absolutely gorgeous! But, I kept my glee in check, knowing from our previous experience that a nice layout, an “updated” kitchen, and pretty pillows in the master stateroom can hide some nasty goodies under the  floorboards. On the surface, it appeared to have everything we were looking for, including all the latest electronics. It, quite honestly, seemed too good to be true.

The next day, a Friday, Brian called the broker who, coincidentally, was Gene Gammon, the exact same captain and broker who’d captained Stan and Chris’ Irwin from Texas to Florida! The same guy who worked for Irwin Yachts for years, who was friends was Ted Irwin, and who owns IrwinYachts.com! We were once again awed by how small and close-knit this beautiful community really is! Down on the docks, it seems everybody knows everybody else and we love that about this town!

Gene was available to show us the boat that afternoon. So, Richard, Brian and I piled into the truck with Max and Mason and we drove a few blocks down the street to the Harborage Marina, where Gene was waiting for us. The exterior and interior were exactly like the pictures. Max (age 15) and Mason (age 10) had not been in a large sailboat before and THEY LOVED IT! They said they could definitely live on a sailboat. It was unanimous! I tried not to get my hopes up because I knew the survey could uncover any number of calamities but, I admit, I was already getting a bit excited.

Brian immediately opened up the engine area, and started poking around. Richard was in the cockpit, checking out the electronics. Max and Mason were still inside, imagining how they’d decorate their small rooms. I was poking around in the kitchen. There was a full-size refrigerator and, in the cabinets that were located in the small hallway between the master stateroom and the salon, there was a full-size deep freeze! That boat actually had more fridge and freezer space than our apartment and homes ever had!

The interior was stained a dark teak with maroon cushions on the settee’s. A small, custom coffee table with teak lattice for the top complemented the warm, roomy interior.

Large windows in the salon provided a great view of the surrounding marina. There were numerous hatches (for ventilation when traveling) and portholes, which provided tons of cheery sunlight. Everywhere I looked, I found something else to love about that boat!

We took several pictures and Brian wrote down some notes. We learned from Gene that the owner was a merchant marine, traveling for three weeks out of every four. He captained a 350-foot ship and he knew how to maintain a boat. He had multiple back-up systems and an overabundance of safety supplies and equipment. The boat was also full of more tools than you can imagine, along with tons of spare parts, all tucked away in the numerous cabinets and hidey-holes placed throughout the vessel. Also, everything was meticulously documented. Later, after reviewing the paperwork from some of their cruising, I knew I’d met my match with regards to organization and perfectionism! The owners documented EVERYTHING!

Gene also told us that the captain’s wife, Amanda (not her real name), was living on the boat while it was for sale. That explained the two bras I found folded up on one of the bunks. I thought that was odd at the time because I didn’t know anybody was living onboard. I knew whoever they belonged to might be embarrassed so I arranged them in a way where you couldn’t tell they were brassieres. Yeah, we chicks gotta watch out for each other. 😉

Two days later, we scheduled a “second showing.” Gene was not available but Amanda agreed to meet us, answer all our questions, and start up the engines. Capt. Stan offered to come with us that day for his expert advice and he brought Chris along. While the men all poured over the boat, having their own mini-inspection, Amanda, Chris, and I sat in the salon, discussing far-less-technical matters about the boat. We asked her how far they’d traveled. They’d owned the boat for 10 years and they’d gone back and forth from Maine to the Caribbean and beyond several times. We asked her about the worst weather they’d been in. She told us a funny, albeit scary story that I will share in another post because it involves a major bowsprit repair.

Richard came below, and asked her some questions as well. We spent about two hours on the boat that day and, the longer we explored, the more we fell in love with her!

But, my caution remained. What would the survey reveal?

NEXT WEEK: THE SURVEY AND SEA TRIAL! WHAT WILL WE FIND???