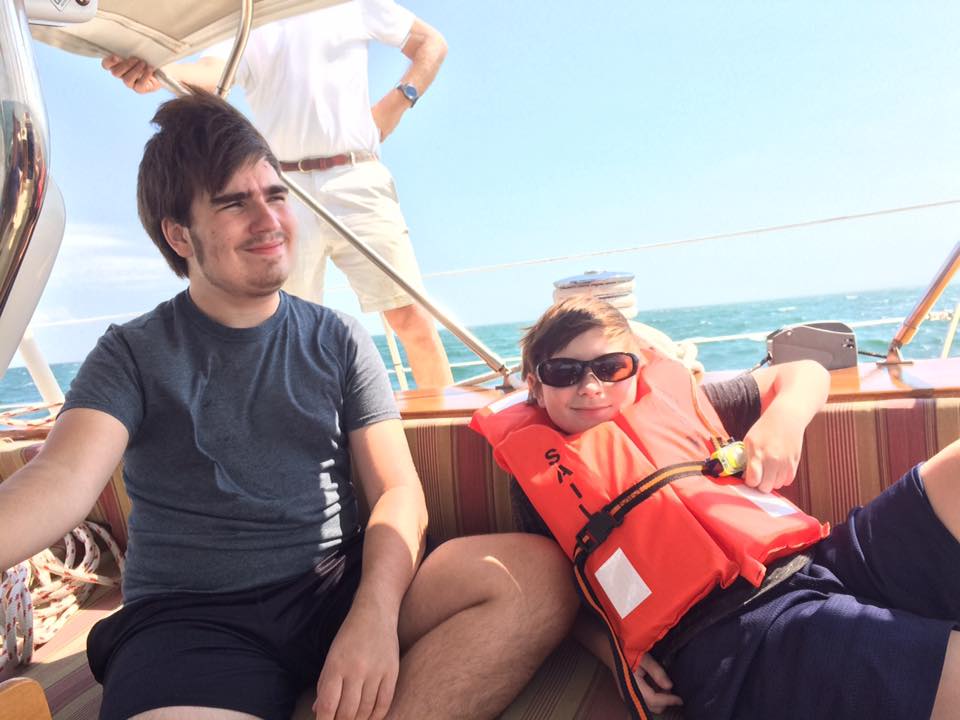 We’d just left the boatyard for the sea trial, and headed into Tampa Bay. There was a Northeast wind blowing a steady 20 knots and the seas were running 4-6 feet. The entire bay was covered with foaming whitecaps. Our hair whipped around our faces and we were all soon covered in salty spray. It was AWESOME! Only two other vessels were out on the water and one appeared to be floundering as he tried to take his main sail down.

John Banister, the surveyor, had the captain, Josh, run the engine and other systems through specific maneuvers. When that boring other stuff was over with, we finally got to hoist the sails and get some REAL action! Despite the messy, washing-machine appearance of the bay, there were some good swells and the boat sliced easily through the chop, gliding up and down. With each descent into a trough, we’d get another slew of spray across the bow and port side. Brian ventured out to stand on the bow and got quite a soaking!

At one point, something went wrong and one of the lines came loose. It flapped violently in the wind, right next to the port side of the cockpit. I instinctively reached out and grabbed Mason, pulling him to the starboard side. But, it was too late. The line snapped him clean across the cheek and the arm. He had quite a welt growing but he didn’t shed any tears. He was having far too much fun during the ride!

Amanda apologized profusely but we assured her that these things can happen as we knew that boats bring bumps and bruises, just like RVing.

After John and Josh had put the boat through all the maneuvers, we headed back to The Harborage Marina. The boat had previously been in a broker’s slip but, today, the owners were supposed to move it to a permanent slip. As luck would have it (not!), that slip was a crooked one at the end of a row of docks, and right against the seawall. You had to go in at an angle. We had full confidence in the captain’s abilities. After all, he drives a 300+ foot tanker! Using the bow thruster, he expertly turned the boat around and backed it in. There was one close call when we came within six inches of the bowsprit of another boat but we didn’t hit it. We were all yelling and pointing but Josh was unfazed. We backed in smoothly and a neighbor, also named Angie, was standing there waiting to be thrown a line so she could tie us off. We were and are continuously amazed at how friendly and helpful people are who live on boats!

After we docked, Richard took the boys back to the apartment, came back to the marina, and the survey continued. It lasted until about 7:00 p.m. and then we took John out to dinner so he could give us the highlights (or low-lights) about what he found.

The major issues were:

The bowsprit was damaged from a trip they took. They’d traveled in 15-foot seas for 5 days and the bow went under a wave at one point. Estimate was $7K-$8K.

One AC was working (but was very old). Another one was blowing luke-warm. And, the third AC had been removed entirely at some point. We planned to replace all the ACs. The final cost ended up being $11,600.

A rudder hinge had been replaced with a piece of wood (yes, really). It needed to be replaced. Estimate was $5K because it needed to be custom made. That actual repair later was far less than that.

The boat needed to be rewired. There was quite a spaghetti mess going on in there and a household extension cord had been used for the charging system. Estimate was $3K-$4K.

The forward head was dumping overboard. A bladder tank was available but its condition was questionable. Sure enough, later it developed a smelly leak. Estimate was $2K-$3K to replace that.

The salon windows needed to be replaced. They were terribly cloudy from sun damage.

Some wood inside had gotten warped from damage during their rough trip (lots of water found its way inside).

There were many other, smaller items to note. Dozens of them. But, overall, the boat, a 1981 52′ Irwin, was in really good condition.

The original asking price was $139K.

Our preliminary offer had been $115K and they’d accepted it without a counter.

They countered with $110K and we accepted that. And, that was a good thing because we’d already given our apartment a notice to vacate. We only had until May 31st to move out.

I’d originally planned on spending at least $160K on a boat PLUS extra for repairs and upgrades but we’d now be able to buy a boat AND make all the repairs for about that sum. So, we were happy. VERY happy! That boat was going to cost 1/3rd of the price of our previous house. And, that house ended up also costing us $100K in repairs the first 4 years alone.

The sellers invited us to the boat for “cocktail hour” to celebrate the deal and they showed us the ins and outs of it while we were there – things we hadn’t had time to cover during the survey and sea trial. Captain Brian came along, too, because we had NO idea how to handle a boat this size!

A few days before closing, Amanda flew back to Maine. She gave us the keys and we hugged. We have stayed in contact via text since then. They have graciously answered all of our questions – ones we didn’t think about before, like, “Um, where’s the handle for the manual bilge pump? We can’t find it anywhere and we have an urgent situation here this morning!”

And, Amanda says she loves hearing about our new adventures.

NEXT: BRIBING THE BEST MARINA IN TOWN TO GET A SLIP!