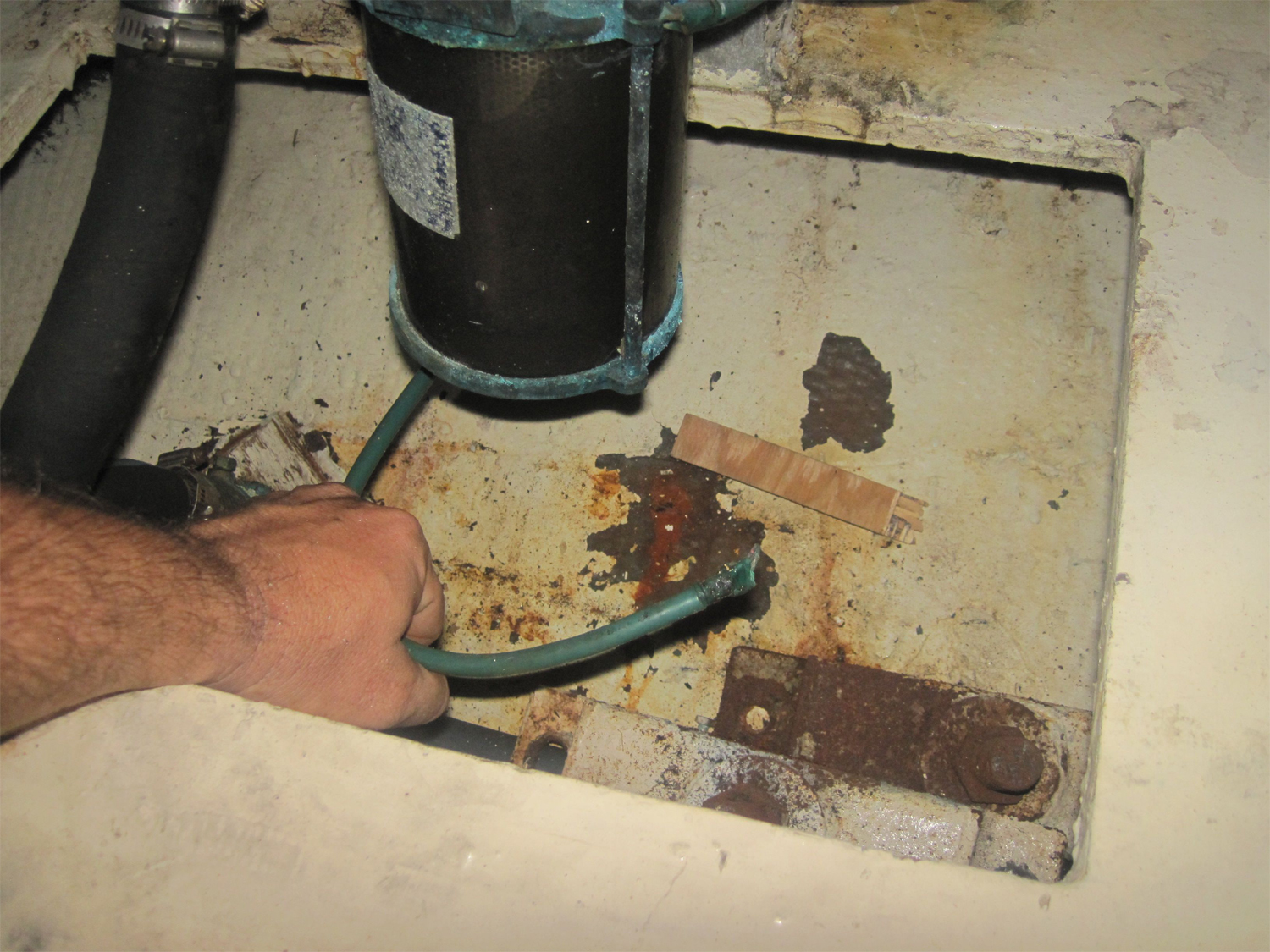 After dinner out with our friend, Brian, who told us he was only paying $700 per month in dock fees to live on his boat, Richard and I had a long conversation that night. We were ruminating about our $2700 per month house payment vs. paying $700 per month in “rent.” In the previous 4 years, we’d spent more than $100K in repairs on that house, which we glumly called The Money Pit. Just when we thought all the major repairs had come to an end, the seawall cracked. Estimates to fix it averaged around $50K. We knew, no matter how long we owned that house, that we’d never get that money back.

The question was obvious. What the heck were we doing? We’d owned three homes over the years, and lost tons of money on all of them. At least when you buy a boat, you KNOW  up front that you’re never getting your money back on all the repairs you make!

If we moved onto a boat, we could reduce our monthly payment by $2000. Our electricity would be less, along with the water bill. Property taxes (excise taxes for boats) and insurance would be a fraction of what we were spending on that house. While our business was doing well, it made no sense to spend $2700 per month living by the water when we could LITERALLY live ON the water…on Tampa Bay (a dream come true!!!)…for only $700!

By noon the next day, Richard had contacted a realtor. And, within three months, we had sold the house. We took a huge loss on it because of the seawall…and because of all the money we’d already dumped into it. But, there was no use wallowing in that. We had done what was needed to stop the bleed. (Incidentally, a few months after we sold the house, a neighbor contacted me, letting me know it had caught on fire!)

Around this time, Richard had expressed an interest in writing more books, and having someone else do the technical work on the website. I was working too many hours already so we decided to hire a new employee to help out. Coincidentally, at that same time, Brian’s employer in Tampa sold out to a foreign firm and the writing was on the wall for their employees. All those U.S. jobs would eventually be shipped overseas (and they have since laid off dozens!).

Brian is super-smart, and has an excellent work ethic. Better still, he’s also a writer! He would be only two blocks away from our apartment in St. Pete. As our friend, and because of his in-depth knowledge about boats and engines, he was eager to help us start shopping for a boat. We quickly typed up an offer of employment before some other company could snatch him up. Knowing he would no longer need to commute to Tampa, and that he could work in his own “home office” (his boat), that he could throw away all his ties and slacks, and that he could travel whenever and wherever he wanted in his boat, as long as he had an Internet connection, he enthusiastically accepted.

In June, we moved into a high rise in St. Petersburg, which was also pretty expensive (but at least we didn’t have to pay for repairs!), and, with Brian’s expert advice, we started shopping for a boat.

I had my heart set on buying a big sailboat, with beautiful lines, massive sails, and a cozy cabin. But, where could we find an affordable, well-kept one that could comfortably house four people?

During our online shopping, we found numerous motor yachts that had plenty of interior space, many at affordable prices. We looked at a few, and were very interested in a 1985 Chris Craft. I still deeply desired a sailboat but Richard and the boys wanted more room.

We scheduled an initial walk-through of the Chris Craft, which was on the other coast of Florida. On the exterior, it looked great! It was nicely decorated and it looked like it was in really good condition. The broker offered me a list of “surveyors” he recommended but, after getting burned by three different home inspectors when buying our house, I declined.

Brian was very eager to assist and he found an amazing surveyor named John Banister, the owner of Suenos Azules Marine Surveying and Consulting. We hired John, and scheduled the survey and sea trial. And, that was when we learned that boat brokers can be just like slimy car salesmen.

Brian and John crawled all over that boat, inside and out, poking and prodding, calculating and inspecting. Brian also took notes and lots of photos. I was sitting in the salon with the broker and, each time Brian walked by, he’d subtly shake his head, letting me know things were not going well at all.

While the boat looked great on the outside, it had severe problems under the deck. Just before we departed for the sea trial, the broker’s mechanic was pouring some fluid into a tank near the engine. It was obvious the tank needed filling because of an ongoing leak. Some time between our first walk-through and the survey, they had painted the entire engine, a sure-sign they were trying to hide something. There were other leaks in the engine as well. It blew a gasket during the sea trial. Something overheated but the alarm didn’t go off. We assumed the broker or owner had disabled the alarm before the sea trial. A fresh coat of paint can’t hide THAT leak!

I, myself, found an active termite infestation. There was a gray water leak that had soaked the carpet in one of the staterooms. Underneath, the carpet padding and wood were covered in black mold.  (That was a deal breaker right there!) Worse, under the floor, there were live wires in the flooded bilge. Live wires in the flooded bilge under the stateroom with the soaked, moldy carpet.

That leak had been there quite awhile and the broker had to admit that he’d known about it all along. But, he hadn’t disclosed it. That broker, who I’ll call Don, was trying to say all the right things to save the sale but the day had devolved into a comedy of calamities. Gauges weren’t working. There was no way to know how many hours were on the engine because that gauge was dead, too. (Another deal breaker!) There were electrical problems. The list went on, and on, and on. I think there were more broken things on the boat than working ones and it appeared they’d tried to cobble together quick-fixes before the survey (which would explain why they had delayed it several times over a period of six weeks). Apparently, duct tape can NOT fix everything!

We were alerted by the surveyor that the natural ventilation vent from the generator compartment was venting to the forward stateroom…which was to be our youngest son’s room. That was yet another deal breaker!

During the sea trial, Don crashed the boat not once, not twice, but three times! He smashed the swim platform when we were backing out of the slip. He then hit a large piling when returning. And, to further entertain us, Broker Don smashed the swim platform yet again after speeding up when we were all screaming for him to slow down! The platform was completely destroyed by the end of the day. Ever since that fateful day with Broker Don, whenever we see a boat being driven in a really stupid fashion, we say, “Oh, look! There’s Don!”

Late that afternoon, we told the surveyor he could stop working. Anything further would be a waste of everybody’s time. He’d already come to me, and whispered, “Do NOT buy this boat.”

We notified the broker in writing the next day that we weren’t buying the boat for the listed price, nor a price significantly lower. He responded, “Well, how much WOULD you pay?” I told him the owner would have to PAY someone to take that lemon off HIS hands.

Sadly, we were only three months away from the end of our lease. Since it had taken us nine months to find that boat, we figured we’d have to just keep on hunting, perhaps even expanding our search outside of Florida. We’d resigned ourselves to the fact that we’d need to extend our lease and we’d heard from other tenants that the rent was being raised by $500 per month!

There was really nothing we could do but press on. And, despite what Richard and the boys wanted, I still had my heart set on a sailboat…

NEXT: MOTOR OR SAIL? A SHIFT IN THE WIND!