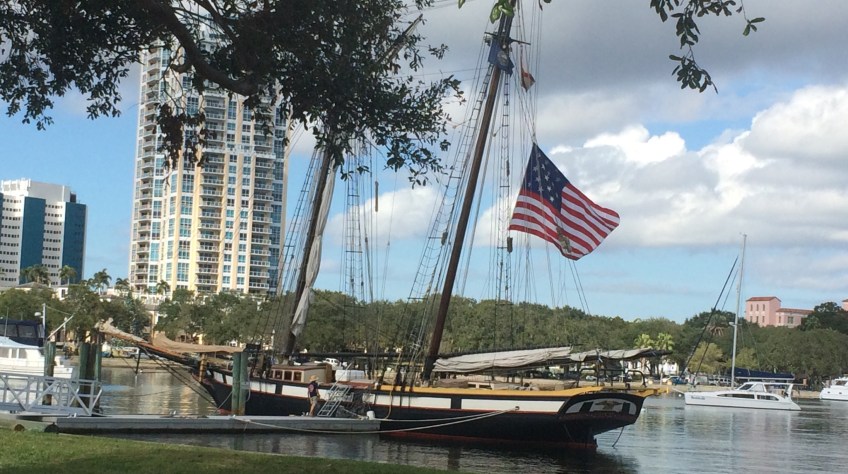 After our plumber’s horrible seizure onboard No Tan Lines last week, we all made a pact that the following day would be a boring one – one devoid of any drama whatsoever. But, alas, that was not to be…probably because we forgot to KNOCK ON TEAK!

The next morning, Capt. Brian Whiddon called me from his boat, saying he’d be late for work. He works for our publishing company and he is NEVER late for work. What happened? Well, let me start at the beginning…

Exactly one week prior, Brian said he was hearing a “bell” on his boat. One night, he even texted us to ask if our cat, Rambo, may have followed him home, which is literally just a few feet down the dock from the floating “home office.” But, he had not. Rambo was comfortably curled up in our salon so, of course, we told Brian he was NUTS. He was babysitting Pookie at the time (his brother’s dog). He said Pookie heard the bell, too. So, laughing, we told him he AND Pookie were nuts. Brian knew he wasn’t crazy because Pookie heard the bell, too.

Fast forward a week to Brian’s phone call. He said, “I was right! There IS a cat on my boat!! I can hear it meowing!!!”

As with a house, if a live critter is loose under your floor, and if you can’t access that area, you might have to cut into the floor to rescue the little furball. And, that’s what Brian was going to have to do so Richard raced down the dock to assist. I was still getting dressed and, as soon as I finished, I grabbed one of our bowls, put some cat food in it, and walked down the dock as well.

By the time I arrived at Brian’s boat, the guys had lifted up floor boards everywhere, and had successfully located the cat. Brian had lured it close with some ham but he couldn’t quite get it. I reached in with a piece of ham, and tried to lure kitty cat forward so I could grab his or her scruff. He/she grabbed the ham, and ripped it completely out of my hand. I was quick, too, and grabbed it right back. I held on tighter, and was eventually able to lure it forward, and lift the starving feline out.

Once I got it in my arms, it was clear kitty cat was very sweet and affectionate. Still, we put it in Pookie’s kennel (Pookie was NOT in there at the time!) in case it tried to bolt, and pondered our next move. We took pictures, and came up with a pretty accurate description. Green eyes. Very small. Hot pink collar and fully-functioning pink bell (ha ha). All black with a tiny wisp of white under the throat, and another near the groin. And, speaking of groin…was it a girl or a boy? The hair was so black we couldn’t tell so…I had to feel down there. After apologizing to kitty cat for pawing her (heh…), I said, “No dangly parts! It’s a girl!!” Now that we had the little kitty out of the bilge, we had to figure out who she belonged to…

We brought her back to No Tan Lines, and transferred her to our cat carrier, gave her cat food and water, and started posting “FOUND” notices online. About 30 minutes later, a friend on our private Dock Facebook page, Diego, said he’d heard a week prior that the crew of the Tall Ship Lynx had lost their cat.

This is a pretty big town and there are LOTS of lost animals, according to Facebook’s lost pets pages. It was a long-shot. It really was. But, I called their office anyway, and left a message. A man in New Hampshire immediately called back, very excited. The missing kitty, Leeloo, belonged to the ship’s captain. We compared descriptions and it sure looked like we had a match! We offered to drive her to the ship, which is docked five minutes from here for the Winter, 2017 season.

The Lynx is a full-sized replica of a topsail schooner that actually served as an American privateer blockade-runner during the War of 1812. The captain was expecting us. He walked down the gangplank as we approached. We exchanged greetings, and opened the cat carrier. He reached in and pulled her out, excitedly saying, “It’s her!” He hugged her tight. And, we knew he was her daddy because she curled right up into his chest. He then held her out in front of him with his hands under her armpits, examining her, and then pulled her back in for another hug, before saying, “You’ve lost a lot of weight!”

That’s when my eyes got all teary. I’m getting teary-eyed again just thinking about it. 🙂

He then told us she’d been missing for 13 days. He proclaimed us honorary sailors on the Lynx.He thanked us profusely, and said we can come sail for free anytime. We, of course, accepted his offer as we’ve been wanting to sail on that beautiful ship for a year now. They do educational excursions and we know Max and Mason would love it!

As we were walking away, we turned back to see the other Lynx crew members coming out to pet Leeloo, and to welcome her home. The captain emailed Brian later with an update, saying Leeloo was doing just fine, and was being spoiled rotten. And, they installed the pet tracking device that had been delivered two days after she went missing.

The previous Friday night, we’d gone out to dinner with some dock friends. While some of us went to the bathroom, the rest were standing outside, in front of the restaurant. Two women approached Diego, asking if anyone had seen a black cat. They said the Lynx was missing theirs. Diego remembered that brief encounter when he saw our post on Facebook. Had we not all gone out to dinner that night, we may never have found the owner. And, that was the exact night that Brian started hearing the bell in his boat!

After leaving the Lynx, we returned back to No Tan Lines. Half a day had been spent doing all of that and, combined with the seizure emergency the day before, we were getting more behind on our work. We all once again made a pact. The following day would be soooooo very boring. We would all be completely bored to tears and we would LOVE IT!

SO, WHAT HAPPENED NEXT?!

Chaos seems to follow us wherever we go. The next day, we received an urgent text from our daughter-in-law. Our son, Matt, who was supposed to arrive this weekend for Christmas, severed his Achilles tendon while playing flag football. He and all of us are devastated because he had to cancel his trip. Thirty-six hours later, he had surgery. It was worse than they thought. (How could it possibly be worse? It was severed!!) Turns out the injury was higher than they thought. He’ll have to wear a cast 2 weeks longer than they originally predicted and full recovery can take 6 to 12 months.

We sadly packed up Matt’s Christmas gifts, and shipped them to Maine. He’s doing well after surgery and he is so very happy his new Xbox arrived just before his injury. His brothers here in Florida are able to play with him online. He is an actuary and, as soon as he no longer needs pain meds, he’ll be able to work from home for awhile. We also bought our son, Zach, a plane ticket so he can fly up there next week, and keep Matt company for a couple of days.

The good news is, nothing weird has happened since then (because we remembered to knock on teak!)…and we’re praying it stays that way!

NEXT: DRIVING (NOT SAILING) TO KEY WEST. SIGH…