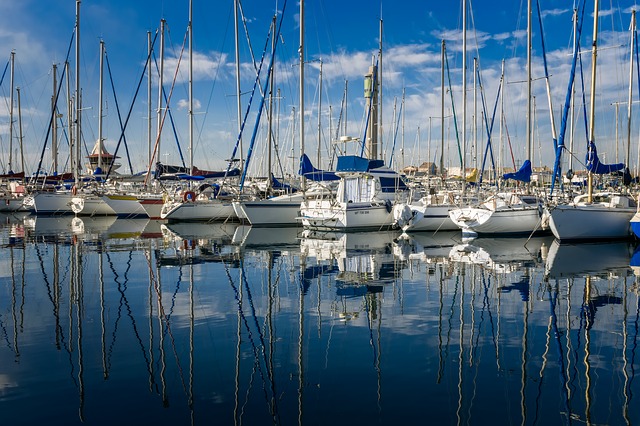 As detailed in past posts, I’ve owned three boats in the past. A 25′ sailboat, a 17′ fishing boat, and a 30′ motorboat. Back then, I was pretty good at launching and docking, whether from a dock or a boat ramp. But, that was 20 years ago. And, those boats were far smaller than No Tan Lines, which is 52′.

I admit, after buying No Tan Lines (“Tanny”), I was nervous. She weighs about 45,000 lbs. You can’t stop her on a dime, nor do a fast turn. She reacts very slowly to whatever you do, whether under power or sail. And, when a piling (or another boat) is close, you run a very real risk of hitting something. That’s why everyone comes out of their boats to watch when someone’s docking!

Today, Capt. Brian Whiddon took us out, and taught me how to dock the boat. To avoid giving our Dock 4 neighbors a heart attack, we took No Tan Lines around to Dock 5. There are no live-aboards on that dock so I could safely practice pulling into slips without a crowd of anxious eyes watching over me (or yelling at me!). Dock 5 is the last dock at the marina and it has a large, deep basin beside it. So, you can approach the dock from a considerable distance, heading straight in. You don’t have to turn at the last moment.

There were empty slips on both sides of the one we used for practice so my nervousness was diminished somewhat. Capt. Brian did an excellent job. Here are his calm, wise instructions so you gals can try this at home yourself!

– As long as water is passing over the keel, you have control of the boat. If you stop completely, you won’t.

– Go very slow. This isn’t a race. Don’t make the same mistake that (name removed) made last week. He was going WAY too fast.

– Gradually ease the bow between the first two pilings, and shift into neutral.

– When you’re halfway in, very gently tap it into reverse to stop moving forward.

– If you need a little more momentum, gently tap it forward. Do not throw it into forward.

– Your deckhands can now use the boat hooks to get the lines on the pilings by the stern. Once they secure those to the stern cleats, you won’t hit the dock in front of you.

– At this point, your crew can toss a bowline to someone on the dock, or someone can jump onto the dock, and have the lines thrown to them.

Using his excellent advice, I was able to move into the slip several times with just a few problems in the beginning. Okay, I may have grazed a couple of pilings and, at one point, Richard was standing on the port side, his feet firmly planted on the deck, pushing a piling away from the boat with all of his might. It was at these times that Capt. Brian’s patient, coaching voice would change to something entirely different:

“Go slow. VERY SLOW! Why are you in such a hurry?! Slow down! Reverse! REVERSE!!”

“Do you really want to lose that toe rail? No? I didn’t think so. Maybe you should steer a little more to the right then?”

“I said SLOWLY shift into reverse. I didn’t say to gun it!”

“Do you see that piling straight ahead?! Yes? Are you TRYING to hit it because YOU’RE ABOUT TO!”

Yes, Capt. Brian gained a few more gray hairs today but, for the most part, I did a pretty good job, especially after learning from my earlier mistakes. And, I was confident enough after practicing numerous times to steer the boat into our own slip. I overshot the slip the first time after turning too late. I aborted, turned around, came around again, and eased her in. It was picture perfect! At that point, there was an audience on the dock and, I have to admit, the men seemed impressed.

Later, one of the men on the dock texted me, and said, “Hey, can Capt. Brian teach MY wife how to dock a boat?”

Now I have to learn how to back her out of the slip. I’m a bit more nervous about that because she’s pretty big and there are boats in the slips behind us. I’ll let you know how that goes.

NEXT: HOW TO SAVE YOUR MARINE MATTRESS IN A HUMID ENVIRONMENT