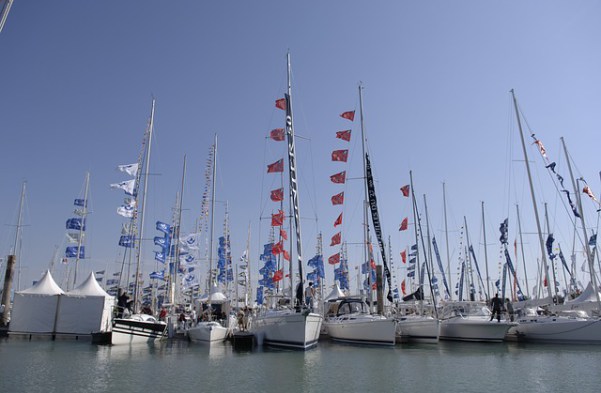 Last weekend, we attended the St. Petersburg Boat Show. Since it’s held adjacent to the marina, we got to watch a huge parade of boats coming in for the show. That was a lot of fun!

Last year, we attended the boat show in order to look for the type of boat we might want. This year, it was going to be a lot more relaxing and fun. We just had to avoid the inevitable temptation to buy all the newest, shiniest gadgets that we never knew we needed until attending the boat show.

We did find one large, shiny gadget. A tower for the back of the boat, which can hold our dinghy, solar panels, and antennas. We will probably purchase one of those in the coming weeks.

Our biggest reason for attending the boat show was the classes. Richard, Capt. Brian and I, as well as our neighbors, Vince and Miles, attended a day-long marine diesel course. I’d like to say it was exciting as all get out…but it was not. Educational? Sure. I learned a LOT. But, I have to admit that, once lunch settled in my belly, my blood sugar began to drop and I was having a VERY difficult time keeping my eyes open. That sucked.

I can’t say, after taking that day-long course, that I could actually fix anything on a diesel motor but it came with a handy booklet and charts so at least I can now identify certain parts of it. And, that’s a start! And, no, I was not the only girl in the class.

On Sunday, the guys took a marine electrical course. I opted out of that one because it’s very difficult for me to take two days off in a row from our business. If I did, I’d have to spend over a week catching up.

On Sunday, we were supposed to help serve pizza after the boat show. It’s an annual tradition for Dock 4. However, I wasn’t feeling well so we opted out after hearing they already had plenty of assistance.

NEXT: SEIZURE ON THE BOAT!