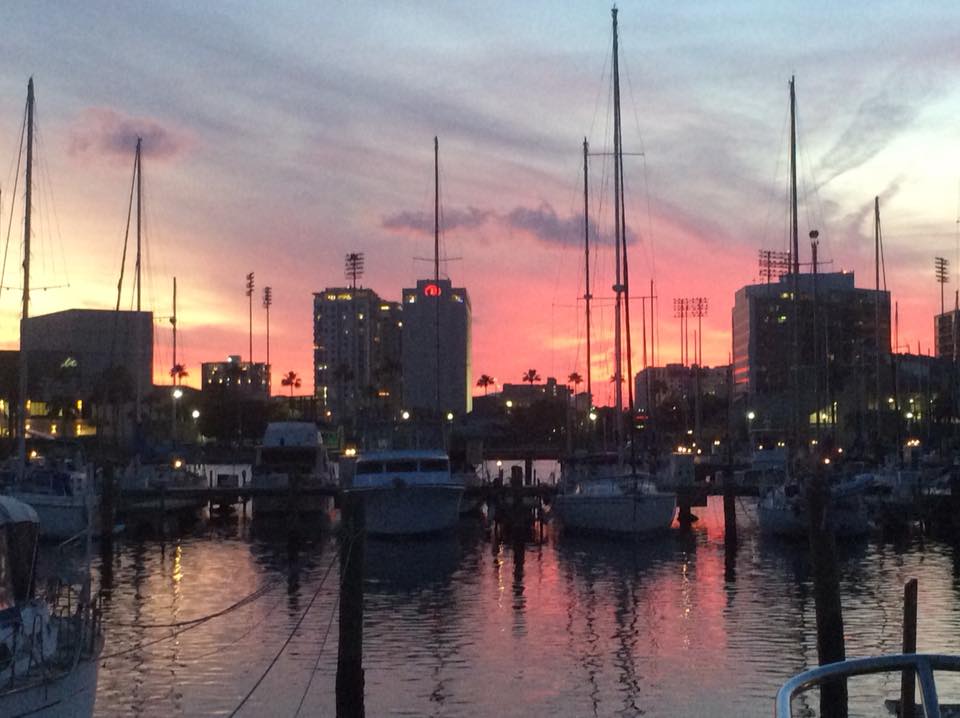 On Tuesday morning, the weather reports looked pretty ominous. Winds of 21 mph, gusting to 50 later in the day. Severe thunderstorms, frequent thunder and lightning, and hail. Oh BOY! It was going to be an exciting day!!

We spend the morning securing lines, and stowing any objects that might blow around. While a tornado or waterspout is of major concern to anyone, the chances of one hitting us were pretty remote so we decided to ride out the storm on No Tan Lines (“Tanny”).

The front was a long line stretching northeast to southwest, with Tampa getting hit first. Our phones all started singing with weather warnings. There was a tornado north of us. By then, the winds had really kicked up and Tanny was bouncing around quite a bit. Once the rain started, we found a few leaks and put towels down. There was tons of lightning and thunder and it was a cozy yet exhilarating day on the boat.

At one point, while we were bouncing around, the boat suddenly pitched and I felt the hairs on the back of my neck stand up. I looked out the bedroom port to the south, up at the sky. I couldn’t see anything. It subsided after a few minutes so I got back to work.

The rain ended around 7:00 p.m. and we were none the worse for wear. In fact, Tanny had received a nice bath in the storm so she was glistening.

Later that night, I found a photo on Facebook taken from the other side of St. Pete. It showed a funnel cloud directly over the marina area. Thank goodness it never touched down! The next time the boat pitches like that, I’m going out on deck to investigate. And, of course, I’ll take my camera!

NEXT: YEA! I DIDN’T WRECK THE BOAT TODAY!!

Don’t forget to subscribe to our newsletter. We’ll alert you to new posts, and we’ll be having book give-aways! 🙂