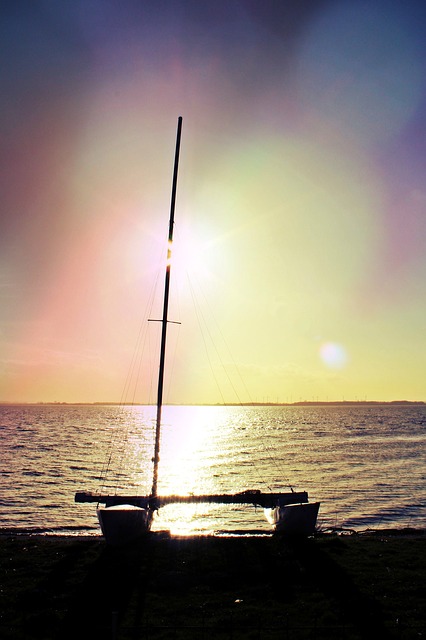 I started dating a boy, Steve (not his real name), who was a daredevil and a juggler. He said his (alleged) overbearing, alcoholic father pushed him and his siblings to learn all about juggling, unicycles, and other circus tricks so they could perform at street fairs and such, earning extra money. He said he hated having his father tell him what to do…but he was very good what he did. He also owned a small catamaran and a small airplane. He was a daredevil and everything about his life was exciting. He was dangerous, handsome, funny, and passionate. And, that’s why I loved him.

The day he took me out on his Catamaran on Galveston Bay stands out as one of the most exciting experiences of my life. We zipped across the swells with only one hull in the water. We saw wild horses on Mustang Island. We tipped over several times, laughing, eager to right the boat so we could do it all over again!

Later, he took me flying in his plane (and he let me steer, which was and still is very illegal!) and, while that was cool, I much preferred sailing. Once, Steve flew his plane low over my home (buzzed me), briefly turned off his engines, and yelled out the window, “I LOVE YOU!” A neighbor reported him, using the identification numbers on the bottom of the plane, and, after an FAA investigation, he lost his pilot’s license for a year. His father was FURIOUS. Steve was far more fearful of his father than he was of the FAA.

To this day, I detest flying. I don’t like red tape, and delays, and sitting so close to strangers. Just not my thing. And, after one particularly bad experience on a commercial jet with very bad weather, I have avoided airplanes whenever possible. I’d much rather travel on the water!

POSTSCRIPT: Steve and I dated for several months, and planned to attend college together in Colorado someday. Time passed, other boys came and went. One caught my eye and I broke up with Steve (which I later deeply regretted – he loved me deeply, intensely, painfully – and it would take another two decades for me to find that kind of deep love again). Steve took risks in life – huge ones. I heard he crashed his plane in a river once, and walked a mile for help with a broken back.

He later moved to Colorado without me and, a few years later, he went missing. Later, I heard they found his body in a crack house. He’d been dead for awhile. He was only 33 years old. He hadn’t done drugs when I knew him but I’d heard from friends that he was getting into trouble. He was a passionate person who lived his short life to the fullest, seemingly tempting death at every turn. In the end, I believe his passionate, intense, deeply loving soul couldn’t deal with the pressures from his alcoholic father and, rather than continue to tempt death with his dangerous lifestyle, he finally ended the pain he’d been enduring for so long. I often still think about him and his poor mother.

Angela is the publisher of WritersWeekly.com, a free source of paying markets for writers. If you want to write for magazines, websites, businesses, or others, check it out. It’s free! Her publishing services company, BookLocker.com, has published more than 9,000 books over the past 18 years. If you want to publish a book, she’d love to hear from you! Abuzz Press is BookLocker’s hybrid publishing company. And, PubPreppers.com offers services to authors who are having their books published elsewhere.