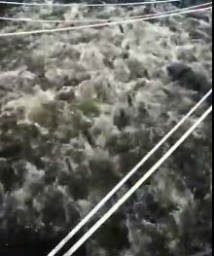 One day last week, I was quietly working on my laptop on the boat when I heard our captain, Brian Whiddon, holler for me to come look at something. I, in turn, told the boys something was going on and they dropped their schoolbooks and followed me through the companionway.

In front of No Tan Lines, a large area of water appeared to be boiling. At first glance, from the back of the boat peering that far ahead, I seriously thought somebody had dumped some sort of chemical in the water. Only after I quickly walked to the bow did I notice it was a huge school of large fish.

The boiling water effect was moving toward our boat, and beside it. We could hear the fish slapping our boat, and see them slapping the boats on both sides of us. They moved behind us, which is when I was able to catch THIS VIDEO…which, I know, turns sideways at the end. Sorry about that.

We originally thought the hunters were dolphins but we never saw any surface. We then thought it might be sharks corralling the fish. Another idea was tarpon because we have HUGE ones in the marina right now. One that was hanging out under the pier awhile back was at least seven feet long.

The show continued for another 45 minutes or so with the school moving all over the marina. One neighbor said it was sharks forcing the school closer to shore for an easier meal.

Brian, who’s also a diver, was scheduled to dive under No Tan Lines that afternoon for some maintenance. Needless to say, he rescheduled…

NEXT:  Halloween Decorations on “No Tan Lines” and BRRRR!!!